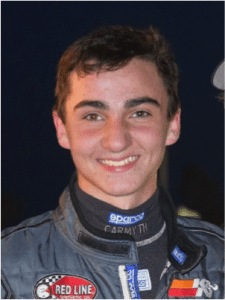 Giovanni started traveling to races with his father – four-time NHRA Champion Gary Scelzi – when he was 3 months old, and has been involved in the sport ever since. Giovanni first began racing when he was 6 years old.

“I have learned so much from all of the people at the race track, especially my brother, Dominic, and the Faccinto brothers,” he said. “Racing is in my blood. I hope to one day race in NASCAR.”

Giovanni had a breakout year in 2010 when he scored a record 24 wins en route to the track championships at Lemoore Raceway and Plaza Park Raceway.

Since then Giovanni has continued to climb the micro sprint ranks. He has recorded multiple key victories, including the Budweiser Outlaw Nationals, the past four seasons and he opened the 2015 campaign with the biggest win of his young career.

Giovanni led all 25 laps to claim the “A” class winged main event at the famed Speedway Motors Tulsa Shootout in Tulsa, Oklahoma. It marked his first career Golden Driller and captured national attention.

Giovanni garnered eight victories and his first career California Speedweek championship in 2016, when he also made the transition to full-sized sprint cars. He teamed up with Roth Motorsports to claim the King of Kings title and also piloted his family owned team throughout his rookie season, which produced four podiums, seven top fives and 12 top 10s in 17 winged sprint car races. He was awarded the 360 Rookie of the Year by the North American 410 Sprint Car Poll voting panel of media members, promoters, sanctioning officials and manufacturers.

This year began with Giovanni crewing for his brother, Dominic, in Australia. Giovanni will split time between his family sprint car and Roth Motorsports throughout the season.