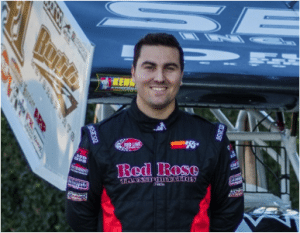 Dominic has known racing since the day he was born. He was taught in the pits at a young age as he followed his father – four-time NHRA champion Gary Scelzi – from race to race across the country.

Once he turned 6 years old Dominic was allowed to officially compete and despite missing a race because he was on the road with his family, Dominic claimed the track championship after winning all seven races he competed in that year.

He spent the next three years racing in a Junior Micro Sprint before moving into a Restricted Micro Sprint, which he powered to 18 feature wins and a track championship at Plaza Park Raceway in Visalia, California.

Dominic stepped up to the Super 600 class in 2009 and became the youngest, at 12 years old, to win in that class. After dozens of victories and a track title at Lemoore Raceway in Lemoore, California, he began racing a Sprint Car in 2012.

Dominic has showcased the same ability to shine in a full-sized race car by winning in both a 360ci sprint car and a 410ci sprint car, including his first-ever victory at 15 years old.

Racing a limited schedule the first couple years in the Sprint Car, Dominic was still able to acquire four wins. He also captured a pair of wins in the King of the West 410 Sprint Car Series in 2015. Dominic closed the season teaming up with Danny Lasoski during a couple of marquee events across the country, which he highlighted with a podium finish at I-80 Speedway.

In 2016 Dominic expanded his schedule to include events with the World of Outlaws Sprint Car Series, National Sprint League and the All Star Circuit of Champions in the Midwest. He also recorded his first career triumph at the famed Silver Dollar Speedway in Chico, Calif., where he also earned his career-best World of Outlaws result with a fourth-place finish during the Mini Gold Cup.

This year began with Dominic making his racing debut in Australia, where he earned a handful of top-five finishes. He has assembled a new team of elite crew members for this year’s campaign.