Inside Line Promotions – MILTON, Fla. (May 20, 2020) – Giovanni Scelzi has been busy during the last couple of weeks.

Scelzi earned a pair of top-five finishes in a family owned sprint car while racing in three different states. His return to racing began on May 8 at Knoxville Raceway in Knoxville, Iowa, where a mechanical problem ended the night early during the World of Outlaws NOS Energy Drink Sprint Car Series event. 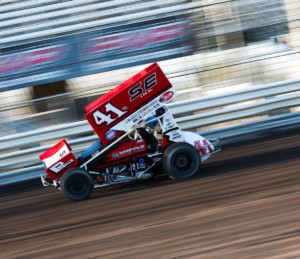 “Going into a tough race like that with 48 of the top drivers you need to be nearly flawless and we struggled for balance the whole night,” he said. “It’s hard when you only get about two laps in hot laps to figure your stuff out and then you go into qualifying, which can make or break your night. We made progress throughout the night and I felt like we had a shot to make the show, but mechanical issues hurt us. That was not an easy race to make the show and we were in contention so that’s a positive.”

Four days later Scelzi ventured to West Texas Raceway in Lubbock, Texas, to tackle the West Texas Crude Nationals. He qualified fourth quickest in his group and won a heat race to lock into a dash. A runner-up result in the dash lined Scelzi up on the inside of the second row for the A Main.

“We were just a bit off,” he said. “Plus, it’s a weird track surface so that made it tricky. It took rubber in qualifying so it made it tough to figure out what we needed to do. Luckily we got the fourth spot for the heat race inversion so we started the heat up front. Track position was the biggest thing all night and we were able to capitalize on good starting positions in the heat race, dash and main event.”

Scelzi placed fifth in the feature to record his fourth top five of the season. The event finale rained out on Wednesday.

The team then hustled to Florida for a USCS Series doubleheader at Southern Raceway last weekend. Scelzi maneuvered from third to second place in a heat race on Friday before picking up a position in the main event to place eighth.

The weekend concluded with a better result on Saturday. Scelzi’s charge from seventh to win a heat race garnered the pole position for the A Main.

“We made some changes after Friday and it was in the right direction for Saturday’s program,” he said. “It’s a sandy track and different surface. In the feature Mark Smith got the lead right away. I slid him once, but he got back by me. There was a point where if I could get ahead maybe I could have held him off. The first 10-to-15 laps before it took rubber the track was dusty and I felt better, but we kept having yellows. Once the track cleaned off Mark was able to pull away a bit and we finished second.”

The traveling continues this weekend as Scelzi plans to head to Tucson Speedway in Tucson, Ariz., for a pavement late model doubleheader with Nascimento Racing. There will be a practice session Friday prior to racing on Saturday and Sunday.

“Going to a new track and not knowing what to expect, especially after all the COVID-19 stuff going on, it will be a challenge,” he said. “However, I tested with them once and it went well so hopefully we’ll have a solid weekend.”

Saturday and Sunday at Tucson Speedway in Tucson, Ariz.

“Todd is a unique sponsor who helps us race and he works on the car when he can,” Scelzi said. “He’s one of the biggest supporters of my brother and I. Todd shows up to races and helps on the car so we really appreciate his support both at the track and away from it.”