Inside Line Promotions – FRESNO, Calif. (Dec. 10, 2019) – Giovanni Scelzi established himself as one of the top drivers in the country this year thanks to a career-best season across numerous platforms. 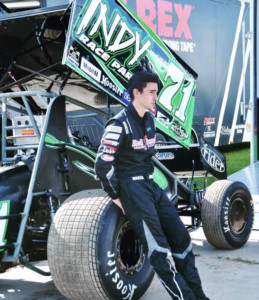 “Graduating high school and putting all my focus into racing showed,” he said. “To win an Outlaws race early in the year and hit our stride the week before the Knoxville Nationals was huge. I was the most confident I’ve been going into the Nationals. If I had a bad night I’d rebound with a podium or a top five. It was an amazing year.”

Scelzi, who became the youngest winner in World of Outlaws history in 2018, backed up the triumph by scoring a victory during the Patriot Nationals in May. He finished the year with six top fives and 13 top 10s during 27 starts with ‘The Greatest Show on Dirt.’

Scelzi produced one win, five top fives and seven top 10s in 10 races with the All Stars. His triumph came at the famed Knoxville Raceway in Knoxville, Iowa, where he became the youngest 410ci winged sprint car driver in the history of the track.

Scelzi added to his success at the half-mile oval by placing third out of 77 drivers during the 8th annual Bell Helmets Capitani Classic presented by Great Southern Bank and 10th at the 59th annual NOS Energy Drink Knoxville Nationals presented by Casey’s General Stores. He then won the Knoxville Raceway season finale two weeks later.

“I ran quite a few races at Knoxville and the first couple I couldn’t get it figured out,” he said. “Something clicked to be able to run the bottom and move around cars. We got a podium at a local show and then won the All Star show. That carried into the Capitani Classic and the Knoxville Nationals. Confidence is a huge thing. It’s intimidating to roll in there with the best drivers in the world. If you feel confident it’s an important part of being successful.”

Scelzi also took his success to pavement, winning in his first-ever start during a spec late model show at Irwindale Speedway in Irwindale, Calif.

“It was a last-minute thing we wanted to have fun with,” he said. “I didn’t really have pavement experience so it was a great opportunity and to win was icing on the cake.”

Scelzi closed the season by becoming the 17th different driver to ever win with both the World of Outlaws and USAC NOS Energy Drink National Midget Series after scoring his first career midget triumph in only his sixth start with the series and 11th career start in a midget during the Hangtown 100 opener at Placerville Speedway in Placerville, Calif.

“It was cool to get that accomplishment and be on the same list as some of the greats in racing,” he said. “I want to thank Jack Irving, Andy Graves and TRD for putting the midget deal together. Also, thanks to Bernie and Betsy Stuebgen as well as my family team with Brandon Hickman and Lucas Boland working on the team. A big thank you goes to my parents as well for all they do for me.”

Other highlights this season include his second straight King of the Wings title, top fives during the National Open and World Finals, sweeping the Asparagus Cup and garnering his first career international triumph during only his second sprint car race in Australia to name a few.

Scelzi will compete in a pair of midget events throughout the offseason. First up is the Arizona Sport Shirts Gateway Dirt Nationals Presented by O’Reilly Auto Parts Dec. 19-21 at The Dome at America’s Center in St. Louis, Mo., prior to the Chili Bowl Nationals in January.

Meridian Steel manufactures steel for a variety of uses, including 80 percent of the steel used by Scelzi Enterprises. For more information, visit http://www.MeridianSteel.com.

“Meridian Steel has been a part of our family team for a few years and we’ve thoroughly enjoyed their friendship as well as their support,” Scelzi said.