Scelzi scored an impressive eight triumphs, including five during King of the West-NARC Fujitsu Series competition – setting personal bests for overall wins and victories in a single season with the premier sprint car series in his home state of California. 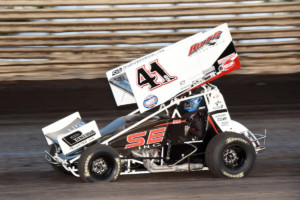 “Last year we were really good in the Midwest and won several big races and were up front a lot in California,” he said. “This year we won more, but it was more hit and miss. I felt like I had more peaks and valleys this year and went on runs, but last year was more steady.”

Swapping between his family owned team and Roth Motorsports likely led to some of the ups and downs, Scelzi noted.

“I think it was tougher than what I thought it’d be going back and forth with different cars, different tires and different crew,” he said. “It was difficult to be comfortable in both. However, we had a lot of great runs in both cars and I’m grateful for the opportunities.

Scelzi’s five KWS-NARC victories led the series and he was in the hunt for the series championship until the checkered flag was waved during the season finale. Scelzi finished third in the championship standings during his first full season chasing points.

“On Night 1 of the season we won and then on Night 2 we had a part failure that took us from running fourth to finishing 18th or 19 th,” he said. “We had to chase points all the way back. We had a DNF and got into a crash at Placerville. We threw two nights away and still almost won the championship. That was a huge testament to the team and what we did this year. We won five races and nobody else won that many so that was special.”

“The Louie Vermeil win at Calistoga was very special to be the first guy to win with a wing on,” he said. “That’s going to be a big win for a long time. It was also special to win in Santa Maria, where we don’t race very often. Also, winning the Saturday night portion of the 360s at the Peter Murphy Classic meant a lot.”

Scelzi added a pair of top fives during World of Outlaws NOS Energy Drink Sprint Car Series competition and he made the Knoxville Nationals A Main for the second straight year.

“Making the Knoxville Nationals was another big thing and to do it two years in a row was pretty special,” he said. “That Friday night show is extremely tough. We got to second or third and fell back to fifth. It was a war to stay in that top four so to lock into the Saturday A Main was a big accomplishment.”

“Red Line Oil is hands down the best oil in the racing industry,” Scelzi said. “They have supported my family for as long as I can remember and have been a big part of my career.”