Inside Line Promotions – FRESNO, Calif. (Oct. 29, 2019) – Dominic Scelzi is focused on domination this Saturday when the King of the West-NARC Fujitsu Series season wraps up at Stockton Dirt Track.

Scelzi and Roth Motorsports head into the oval in Stockton, Calif., ranked third in the championship standings – only seven points out of the lead. 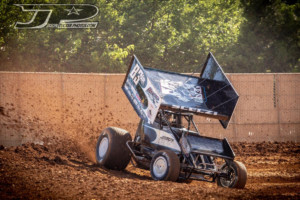 “My best chance is to set quick time during qualifying, which gives four points, and for those guys in front of me in the standings to not qualify in the top four,” he said. “And then if I win the feature I can win the championship. It’s three points more to win than to run second so that’d be the seven points right there. The tiebreaker for the championship is feature wins and we have everyone beat there.”

Scelzi enters the event with a series-leading five wins this year. He has also led a series-best 82 feature laps. Scelzi has set quick time during qualifying two times – tied for the second most. His four heat race victories are tied for fifth most. Additionally, Scelzi has three dash wins, which ranks second.

“In all honesty I have no expectation,” he said. “We were quick time the last time we were there in the No. 83 car. If we go quick time and win the main event that’s all we can do. We can’t control what the other two guys are doing. I think I’m in a good spot. Those guys are even on points. They have to worry about each other. I think that will help me out because they only have to beat each other by one point. If we go quick time I’m still behind going into the feature. Then we let it all hang out. I believe if we’re standing on top of the podium on Saturday we’re going to be a champion.

“I want it extremely bad. This is the first year I’ve run the entire schedule for points. The last time we attempted it was 2015 and I had an injury that took me out. We have had three nights with bad luck this year. If just one of those where a dumb thing happened didn’t happen we’re in the points lead by a lot. I feel like we’ve been the best car. For us the only way to finish this out is to win another race.”

Scelzi has been victorious at Stockton Dirt Track each of the last two years and during four of the last six seasons.

Saturday at Stockton Dirt Track in Stockton, Calif., with the King of the West-NARC Fujitsu Series

Worldwide Bearings was created in 1994 and has developed into the world’s largest supplier of bearings for the power sport industries, including motorcycle, ATV, snowmobile, go-kart and watercraft. The company specializes in high-performance applications as well as everyday rebuilds. For more information, visit http://www.WorldwideBearings.com .

“Everybody uses Worldwide Bearings in various aspects of racing because it is the best product available,” Scelzi said.