Scelzi and car owner Bernie Stuebgen opened the competition on Friday by qualifying seventh quickest out of more than 50 competitors during a preliminary night for the 29th annual My Place Hotels 360 Knoxville Nationals presented by Great Southern Bank. Scelzi then gained a position in a heat race to finish fourth and lock directly into the A Main. 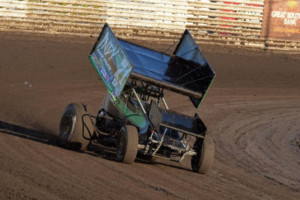 “We timed good for how late we went out and we got a transfer in the heat race, which is crucial,” he said. “That put us in a great position for the main event.”

Scelzi started third and ran in that position for most of the race. Traffic began to play a role for the top competitors during the second half of the feature and Scelzi was involved in a wild four-way battle for the lead in the closing stage when contact with another driver broke the steering in his sprint car.

“(James) McFadden got underneath me and we got together,” he said. “I had a run underneath and he closed the door. It was a racing deal. It sheered the steering arm off and then we went straight into the fence.”

Scelzi was unable to restart the race and he was credited with a 23 rd-place finish. That relegated him to the fifth starting position in the B Main on Saturday. However, Scelzi didn’t run in that position long as he powered to the victory to garner a transfer into the back of the main event.

Scelzi continued to march forward throughout the 25-lap feature, rallying from 21st to an 11th-place outing.

“We broke the frame (during Friday’s crash) so it was debate if we’d race,” he said. “We got it fixed and it was good. We hot lapped good and won the B Main from fifth. A race that’s only 25 laps is pretty short. Everyone gets going the same speed so it’s hard to make a lot of moves. It was a good overall finish. We had a really maneuverable race car. We could run the top, bottom and middle. Last year we backed up in the Saturday main event and this year we went forward so it was good.”

Scelzi took another step forward on Sunday at Knoxville Raceway during the 8th annual Bell Helmets Capitani Classic presented by Great Southern Bank. A whopping 77 drivers tackled the final tune-up for the Knoxville Nationals and Scelzi started on a strong note by qualifying sixth quickest in his group of nearly 40 racers. He then picked up a position in a heat race to finish second and earn a spot into the pole shuffle. Scelzi won a round before dropping his second round, lining him up fifth for the main event.

“It’s a very tough race with almost 80 cars,” he said. “We qualified good and had a good heat. We won the first round of the pole shuffle. We almost got by Brad (Sweet) in the second round and we were in a good spot starting fifth in the main. I got right into third. I challenged Brian (Brown) and David (Gravel). I think I got by them both once. Late in the race I made a mistake and almost got into the fence. I jumped the cushion, but was able to save it.”

Scelzi maneuvered forward and again was part of a three-driver battle for the win in the closing stage before he ended third.

“That’s as close as you get to the Knoxville Nationals with that many good cars and the quantity of cars,” he said. “We’re in about as good of a place as we can be.”

Next up is the 59th annual NOS Energy Drink Knoxville Nationals presented by Casey’s General Stores, which is held at Knoxville Raceway this Wednesday through Saturday.

“K&N Filters gives our motors the maximum performance they can possibly have,” Scelzi said. “They are the best product on the market and we’ve enjoyed getting to know everyone at K&N throughout the years.”