Scelzi guided the Bernie Stuebgen owned sprint car to an Ollie’s Bargain Outlet All Star Circuit of Champions victory and he charged from 18 th to third place in the 360ci winged sprint car main event. 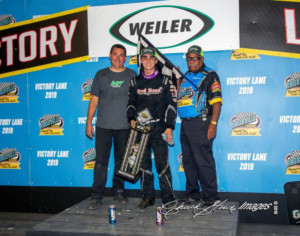 “That’s what you want to do before the Knoxville Nationals,” Scelzi said. “We were good and I felt like we could have won both classes.”

Scelzi set quick time in his group’s qualifying session to open the 360 action, which featured more than 50 drivers. He was on the move in a heat race before the throttle linkage came loose, which resulted in a DNF. However, Scelzi accumulated enough points to lock into the 18thstarting position for the 18-lap A Main.

“We picked cars off one by one,” he said. “The race went green to checkered. I ran the top most of the race and then went where they weren’t when I needed to pass. If it was a longer race or we got a caution I think we could have won.”

Scelzi’s rally from 18th to third place tied his career-best 360 finish at the half-mile oval.

Scelzi was just as strong in the 410 class, qualifying third quickest overall out of 48 drivers and fastest in his group. He then won a heat race from fourth and a dash from the pole to line up on the outside of the front row for the 25-lap main event.

“It was a brand new car,” he said. “I didn’t feel comfortable the first half of the night and we tried to get it better. We had speed; I just wasn’t comfortable. We got it dialed in for the A Main. The harder I drove it the faster it went. To beat two of the best locals in Kerry Madsen and Brian Brown was pretty cool.”

Scelzi took the lead on Lap 10 and powered to a victory by more than 7.8 seconds, making him the youngest 410 winner in the storied history of the ‘Sprint Car Capital of the World.’

“That was cool,” he said. “I think the guy before me set the record in 1988. I was six days younger than him so that was pretty cool. I didn’t have any time to spare to break that record.”

It also marked his first career All Star win and his fifth triumph of the season.

To make the night even more special Scelzi’s older brother, Dominic, also won on Saturday in California. It marked the first time both brothers won a sprint car race on the same night after doing it 14 different times while competing in micro sprints.

Giovanni Scelzi will return to action this Friday and Saturday at Knoxville Raceway during the 29th annual My Place Hotels 360 Knoxville Nationals presented by Great Southern Bank.

Friday and Saturday at Knoxville Raceway in Knoxville, Iowa, for the 29 th annual My Place Hotels 360 Knoxville Nationals presented by Great Southern Bank

“Bernie and Betsy Stuebgen have become really close friends since I’ve gotten to know them,” Scelzi said. “They’ve always given me a fast race car and it’s been a lot of fun driving for their team. I really appreciate the opportunity they’ve provided.”