Scelzi captured a fourth-place finish during the FVP Platinum Battery Showdown finale to cap a busy week that featured four races in a four-day span. 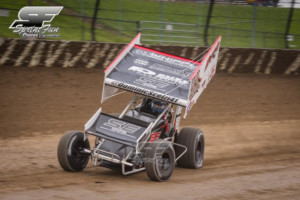 The action began last Wednesday at Brown County Speedway in Aberdeen, S.D., during the Star Spangled Showdown. Scelzi qualified 12th quickest and he placed fourth in a heat race during his debut at the oval.

“We qualified decent and ran decent in the heat,” he said. “On the first lap of the main event I got my right rear over the edge and fell to 18 th. We drove back to 10th and got ran out of room on a late restart so we fell to 14th, which is where we ended.”

Scelzi and his family owned team ventured to Cedar Lake Speedway on Friday. He qualified 18th quickest, but a charge from sixth to fourth place in a heat race locked him into the 12th starting position for the main event.

“We didn’t time in very good because I think we made the wrong gear decision,” he said. “In the heat we drove from sixth to fourth, which was pretty good. We were good at the beginning of the feature and then they red flagged it with the rain that hit. We came back on Saturday and the track was extremely slick all the way across. As the race went on we got a little looser. We were running ninth on the last restart. I tried to go for a little more, but the guy in front of me checked up and I had to lift so we lost some spots.”

Scelzi settled for a 12th-place run.

He did double duty during the night show, competing in both the World of Outlaws race with his family team and in the Midwest Power Series program for Protofab Racing.

Scelzi finished fourth in a Midwest Power Series heat race and he had rallied from eighth to second place in the main event when a broken radiator sent him pitside just after the midpoint of the race. He was credited with an 11th-place result.

The night ended on a better note in World of Outlaws action.

“We got an early pill draw, which helped a lot as we qualified sixth quickest,” he said. “We started second and ran second in the heat, which put us in the dash. They had the No. 1 pill left for us so we got the pole for the dash. We led the dash until the last 10 feet coming to the checkered. Brad Sweet got by on the bottom.

“We dogged Brad the whole main event. We were on his bumper the majority of the race. As traffic was getting more difficult to maneuver the track started cleaning off and laying rubber beneath the cushion. I tried to make a move on Brad for the lead, but it didn’t stick and I lost a spot to David Gravel. I tried to get him back in the next corner and lost a spot to Carson Macedo so we ended fourth. Second would have been phenomenal, but as good as we were and as close as we were I didn’t want to leave any cards on the table.”

Scelzi’s fourth-place run marked his second top five of the season with the World of Outlaws.

He is scheduled to return to Roth Motorsports this Friday at Ocean Speedway in Watsonville, Calif., before a King of the West-NARC Fujitsu Series race on Saturday at Petaluma Speedway in Petaluma, Calif.

Friday at Ocean Speedway in Watsonville, Calif., and Saturday at Petaluma Speedway in Petaluma, Calif., with the King of the West-NARC Fujitsu Series

Panella Trucking is one of the largest agriculture carriers in California. For more than 80 years Panella Trucking has been servicing farmers, packers and processors by hauling agricultural goods and providing quality trucking services. For more information, visit http://www.PanellaTrucking.com .

“The Panella Family has been close friends with my family since before I was born,” Scelzi said. “Their support for our racing has been monumental and the work their business does is important for our part of the country.”