Inside Line Promotions – TULARE, Calif. (June 10, 2019) – Dominic Scelzi has found his mojo again thanks to a stout weekend of racing.

Scelzi headed to his home state of California in the middle of last week fresh off a 17th-place run with the World of Outlaws NOS Energy Drink Sprint Car Series on Tuesday at Fairbury Speedway in Fairbury, Ill. 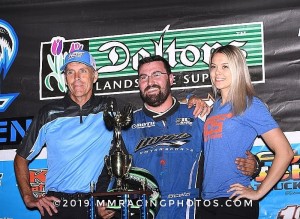 “I think the biggest thing is that it’s easier for me at places I’ve raced a lot to be able to change what I need to do in the race car,” he said. “I feel like I can change my driving style to better suit the car and track.”

Scelzi climbed behind the wheel of a Roth Motorsports machine on Friday for a doubleheader at Thunderbowl Raceway, where his fortune turned around and so did his confidence.

Scelzi qualified 12th quickest, won a heat race and placed third in the dash to line up on the inside of the second row for the A Main.

“We ran third for most of the race,” he said. “I got to their rear bumpers and I passed for second, but the yellow came out. I was running the top in turns one and two and the bottom in turns three and four, which is the opposite of where they were running. On a restart the second-place guy went to the top and Rico (Abreu) was able to get by me for third.”

Scelzi’s fourth-place finish was the first of three straight top fives in about a 24-hour period at the tricky track.

Scelzi did double duty during the Peter Murphy Classic on Saturday. He placed second in the pole shuffle to garner the second starting position for the 360ci winged sprint car main event.

“They reworked the track before the pole shuffle,” he said. “It was still locked down in turns three and four and slowly slicking up in turns one and two. I got right there to Rico and a yellow came out. I thought he’d move down and lucky he didn’t. He stuck to the top and I stuck to the bottom and I was able to get by him. He got under me going into turn one on one lap, but he slid across the track and I was able to build a little ground. I moved up to the top on both ends and after a late restart we were able to pull away so it was pretty good. To get by Rico and win was a big confidence booster. It was huge for us.”

The win was Scelzi’s second of the season.

He was also efficient in the 410ci winged sprint car, qualifying fifth quickest and finishing third in a heat race to line up eighth in the King of the West-NARC Fujitsu Series A Main.

“We were able to run up through there,” he said. “We got to third late. I was trying to get more and run second, but I came up short and lost two spots in the process. (Jonathan) Allard was running the bottom in turns one and two. He went to the top on a restart and it was a late decision. I got tight up against the wall and that allowed (D.J.) Netto by. The white flag came out and I got through turns one and two good, but I messed up trying to get by Netto and (Ryan) Bernal got by me. You don’t want to lose positions because the two guys I lost spots to are guys I’m battling for the title, but I was happy to be as competitive as we were.”

The performance moved Scelzi into third in the championship standings. He is only 22 points out of the lead.

Scelzi will return to his family owned sprint car this Thursday at Eldon Raceway in Eldon, Iowa, with the Sprint Invaders prior to World of Outlaws races on Friday and Saturday at Knoxville Raceway in Knoxville, Iowa, during the Brownells Big Guns Bash.

Thursday at Eldon, Iowa, with the Sprint Invaders and Friday and Saturday at Knoxville Raceway in Knoxville, Iowa, for the Brownells Big Guns Bash with the World of Outlaws NOS Energy Drink Sprint Car Series

From the wilds of Baja, Mexico, to the “Good Ole Boys” of NASCAR, from mowers to fitness equipment, FK Rod Ends is there with an evolving program designed to supply rod end products to users everywhere. For more information, visit http://www.FKRodEnds.com.

“FK Rod Ends makes the best rod ends in the business,” Scelzi said. “They help us out with the sprint cars and the micros. We really appreciate the support and we wouldn’t run anything else.”