Scelzi finished a close second during the winged “A” class main event at Tulsa Expo Raceway, where the top 24 drivers out of approximately 200 entered battled around the bullring for the coveted top prize. 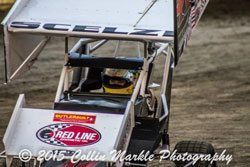 “At first we were so mad we didn’t win, but for the first time with this combination I was pretty happy with it,” he said. “Second place out of so many of the best micro sprint drivers in the country is a great feat.”

After picking up his first career Golden Driller in 2015, Scelzi put himself in contention for a repeat thanks to a drive from fourth to win a heat race and from third to win a qualifier. That lined him up on the outside of the front row for the main event.

“They graded the track right before we went out,” he said. “I thought we had a good chance of winning, but the track never widened out in the feature. I got under the leader once and it wasn’t enough. There was a restart with two laps to go. It came down to whether he made a mistake and he didn’t make a mistake.”

Scelzi’s second-place finish marked his third consecutive year with a top-10 result in the winged “A” class feature.

He also competed in the winged outlaw division, which also featured approximately 200 premier drivers from coast to coast.

“In the heat race we had so much speed,” he said. “In the first corner we were three wide for second. The guy on the outside jumped the cushion, came down and hit the second-place guy, who hit me. We fell back to ninth and ran it back to fourth. We had so much speed in that car. We were a long way back and ran everybody down.”

After overcoming the early heat race incident, Scelzi powered from 14th to seventh place in a qualifier.

“We were happy we made a qualifier,” he said. “We just ran out of laps. It was only 10 laps so it’s difficult to pass that many cars in that short of a time. Then in the B Main the track was rubber down and I just didn’t get off the cushion quick enough.”

Scelzi ended with a fifth-place result in a B Main to miss transferring into the feature by only three positions.

Scelzi’s weekend in nonwing action wasn’t as fun. He finished fifth in an “A” class heat race on a greasy track and then second in a C Main before the team elected to skip a B Main. In nonwing outlaw Scelzi placed third in a heat race and seventh in a qualifier before a DNF in a B Main.

“We only ran nonwing one time last year,” he said. “We just couldn’t get a handle on it. We’ve been better than that in the past. We were trying so hard. We were throwing things at it we haven’t done and nothing worked.”

Scelzi is scheduled to return to competition on April 1 at Plaza Park Raceway in Visalia, Calif.

“I want to thank Brent Ventura for his help and Jeff Gardner for getting everything done so quickly,” Scelzi said. “Shocks play a huge role in racing and that’s why I rely on KW Suspensions.”

To meet the media relations needs of your program by joining Team ILP, contact Shawn at 541-510-3663 or [email protected] For more information on Inside Line Promotions, visit http://www.InsideLinePromotions.com.